Posted by Zimbabwe NeuroSurgeons on Oct 16, 2015 in patient education | 0 comments

A brain tumour is a mass of abnormally growing cells in the brain or skull. Half of the time it will have spread from somewhere else in the body (metastatic brain tumour). But sometimes it can just start from the brain (primary tumour) the tumours are named from the tissue type where they originate from. Gliomas are the most common primary tumours and have different grades ranging from those that are curable by surgery to those that a very deadly despite any form of treatment. Other types are meningiomas and medulloblastomas.

How can I suspect a brain tumour?
The symptoms for brain tumours are usually not specific and can mimic other diseases. Often these symptoms tend to be caused by the other diseases rather than the brain tumour. Because of this, sometimes brain tumours are overlooked and lead to delay in diagnoses. The symptoms include nausea, vomiting, new onset seizures, weakness or abnormal sensation on one side of the body, loss of coordination, trouble talking, changes in vision or abnormal eye movements, memory or personality changes, ringing in ears or reduced hearing. In children they may present with signs of hydrocephalus. (Refer to article on hydrocephalus). Presence of these signs may prompt taking of images such as Computer tomography scan (CT) or Magnetic resonance scan (MRI). If a brain tumour is suspected the patient is referred to a neurosurgeon (brain surgeon) for further treatment. Sometimes the neurosurgeon may need to do an operation to take a small sample of the tumour before giving a diagnosis of the particular brain tumour. 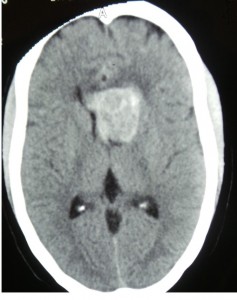 How can I prevent brain tumours?
Since the cause of most tumours is not known, not much can be done to prevent them. However avoidance of radiation may reduce the occurrence of tumours that can be induced by radiation (eg meningiomas). Avoidance of smoking will reduce lung cancer and hence metastatic brain cancers. Same applies for UV radiation causing melanomas. Speculations on mobile cellular phones causing brain cancers have not yet been clearly confirmed or refuted.

How is it treated?
Surgery, radiotherapy and chemotherapy and just follow up are the main modalities of treating brain tumours. Often various combinations of the above modalities are employed. Surgery is usually the best when it is possible and can on its own be curable for lower grade tumours. However sometimes complete removal of the tumour may not be possible because of tumour size or its location near deep sensitive brain structures. In such cases a partial resection is done then combined with another modality. Radiotherapy involves use of X-rays to suppress/ kill tumour cells. This however also may damage normal brain tissue depending on the dose and duration of use. Benefit is always weighed against the risks involved. Chemotherapy is the least effective modality except for some specific tumours like lymphomas which respond well. Some tumours if they are small and not causing symptoms may be left alone, but close monitoring is mandatory.

What is the expected outcome for brain tumour?
The outcome depends on age at diagnosis, size of tumour, location and type of tumour, extent of surgery done and other illness the patient has. Prognoses range from cure to death in a few months depending on the above.